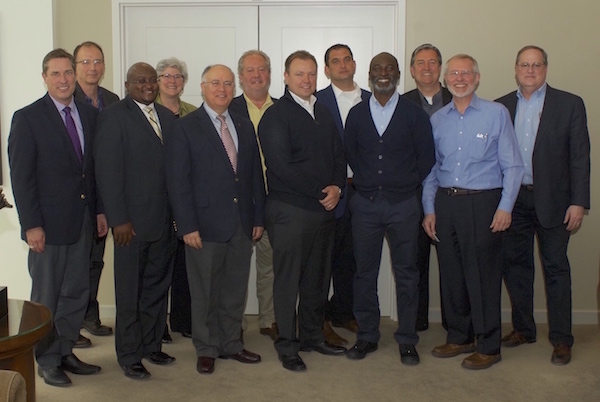 The members of the REFRESCH Round Tables act as a sounding board regarding REFRESCH efforts.  They also have been helpful in making connections, giving advice in areas of their expertise, and supporting REFRESCH, in general.

Jon Allan became Director of the Office of the Great Lakes in 2012, contributing his considerable experience in aquatic sciences and fisheries & wildlife to the office’s mission to protect, restore, and sustain the Great Lakes watershed.  With nearly three decades of experience in environmental and energy policy, he has professionally applied his understanding of ecological management in a variety of academic, corporate, and public occupations.  Jon’s research on wetlands, stream ecology, and water policy has been published in journals in Canada and the U.S. Organizations and individuals rely on his expertise to lead environmental planning and policy projects in Michigan and the Great Lakes region.

Khalil Atasi is Senior Vice President with CDM Smith and Country Manager for Saudi Arabia and Water Sector Leader for the GCC (Gulf Cooperation Council) Countries;  his home base in the United States is in Orlando, Florida.  He was over 39 years of experience in the consulting industry and academic institution in the area of water and wastewater treatment and reuse,  and industrial waste treatment.  He is a licensed Professional Engineer in six states, and a licensed  Wastewater Treatment Plant Operator Class A – State of Michigan.

John Austin is the former President of the Michigan State Board of Education, Director of the Michigan Economic Center, a non-Resident Senior Fellow with the Brookings Institution, and lectures on the “Blue and Green” economy at University of Michigan.  He created the Great Lakes Economic Initiative with Brookings and authored key reports on Great Lakes Economy. As head of the Detroit New Economy Initiative he created Global Detroit to welcome immigrants, more recently coined and created the Michigan Blue Economy Initiative to grow our water and water innovation based economy in Michigan, and has twice led state Commissions for the Governor on the economic role and future of higher education in Michigan.

Dan Bicz, building upon a 4-decade development track record approaching $2 billion, is now totally immersed in energy-food-water security initiatives in four continents. As a result of assisting Parjana® deploy in Africa and the Chesapeake Bay with the UN Foundation, World Bank Collaboration 4 Development and the DOD, Dan is now assisting a biotech company deploy water-food-energy platform in Australia, India, Turkey, Canada and the U.S. Together, Parjana® and Arctech in collaboration with non-profit Emerald Planet are pursuing an integrated solution to mitigate drought on agriculture in California.

Matthew Marks Evans is the executive director of E-Three Labs.  Before coming to E-Three, he worked as both a principal and an educator at The University Preparatory Academy of Detroit. As the director of the Academy’s international programs he provided a strong role model for the integration of academic skills with social and cultural awareness by bringing students from Detroit to Senegal, Mozambique and South Africa.  He has extensive experience in administration, education and community-based development projects.

Greg McPartlin is a Michigan native, his focus has been on numerous entrepreneurial ventures in which his concentration was the commercialization of water technologies.  This has taken him to over 50 countries. In March of 2012 he co-founded Parjana Distribution, an innovative water management company that is a paradigm shift and forever changes the way the world manages water.

Peter Muhoro is the vice president of Strategic Industry Research and Analysis for the National Rural Utilities Cooperative Finance Corporation (NRUCFC), the finance cooperative created and owned by America’s electric cooperative network. Prior to working for the NRUCFC, Peter was the Chief Strategy Officer at Pedernales Electric Cooperative, the largest electric distribution cooperative in the United States. Before that, Peter served as an Advisor at the Cooperative Research Network, the technology research arm of the National Rural Electric Cooperative Association. He has launched several small businesses focused on bottom of the pyramid issues and poverty reduction through electricity access. He is a sought-after speaker both on the national and international arena.  Peter holds a Ph.D. in Applied Physics from the University of Michigan with a focus on energy.

Chuck Perricone is a graduate of Western Michigan University where he graduated with honors prior to joining Price Waterhouse.  Elected to Michigan’s House of Representatives, he then received an Honorary Doctorate from WMU and was elected by his peers to serve as Speaker of the House—the first under term limits.  He founded The Perricone Group of companies, serves on the MI Caucus Foundation Board of Directors and owns Dome Magazine, an award-winning virtual publication featuring a Pulitzer and two Emmy-winning columnists.

Erik Petrovskis is Director of Environmental Compliance and Sustainability at Meijer.  Erik has 20 years of experience as an environmental consultant, where he also maintained an active applied research program in bioremediation.  Erik is responsible for due diligence, remediation, compliance, and sustainability at Meijer, with particular focus on stormwater management and food waste. He holds a PhD in environmental engineering from The University of Michigan and is a licensed Professional Engineer.

Jean-Jacques Taty is Associate Professor of Cinema and Francophone Studies, Department of World Languages and Cultures at Howard University in Washington, DC.  His areas of focus are post-colonial cinematic narratives, cultural and social change, cross cultural and visual medias.  A native of Gabon, he was asked by the ambassador of Gabon to follow and assist with the REFRESCH effort.   He has been of immeasurable assistance to the Gabon team, traveling multiple times to Gabon with the group.