REFRESCH’s introduction to Gabon began with an invitation from Ambassador Michael Moussa Adamo to address a number of challenges in Gabon in the areas of food security, clean water, and distributed energy. From there, they were introduced to a Gabonese faculty member at Howard University, Prof. Jean-Jacques Taty, who made the initial connections between REFRESCH and collaborators within Gabon.

The REFRESCH newsletter, available here in both English and French, highlights efforts from the past year. 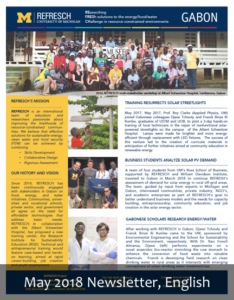 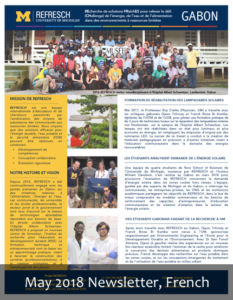 REFRESCH’s activities are also described in “Achievements through Time” below.  Two years of efforts led to a groundbreaking workshop in May 2016 in Lambarene, Gabon at the Albert Schweitzer Hospital that drew almost 100 stakeholders from rural communities, universities, vocational schools, NGOs, government, and press.  All agreed that people need access to affordable technologies that address basic needs.  The REFRESCH team, in close collaboration with the Albert Schweitzer Hospital, has developed a new paradigm in vocational education for improved livelihoods centered around food, energy, and water – the Research Institute for Sustainability Education (RISE). Technical and entrepreneurial training would feature case-based and hands-on learning, aimed at rapid career-building.

In December 2014, REFRESCH made its first visit to Gabon. A primary goal – meet with people in a recommended community to ask them to identify issues with food, energy, and water-security that we could work together on addressing. A well-drilling company, DrillWatt Gabon, introduced REFRESCH personnel to people in a small village by the name of Ayeme Agoula. During this visit, REFRESCH was also met with people in several Ministries to discuss prime problem areas for REFRESCH to work on with local people.

Two faculty and two students from the University of Michigan REFRESCH team, together with an advisory board member from Howard University, visited Gabon between February 26 and March 9, 2015. First, at the suggestion of the embassy and Gabonese national park system ANPN, the team visited several remote villages in and around Lopé National Park to identify an off-grid village that would want to host a larger group of undergraduate students in May who would be demonstrating several technologies relating to food-security, renewable energy, and clean water. After that, the team returned to Ayeme Agoula, where it worked with the local people on evaluating solar, thermoelectric and pico-hydro energy and on building efficient, smoke-controlled cookstoves. The trip was also successful in continuing to build relationships with people in several NGO's including the Wildlife Conservation Society (WCS).

In Massenguelani, a group of 15 University of Michigan students spent nearly two weeks undertaking a range of projects in collaboration with local community members. Included among these projects were demonstrations of small-scale solar PV home systems, how to construct an improved cookstove using local materials, and an electric fence powered by car batteries. REFRESCH was impressed with the interest in all of these approaches and, in particular, the subsequent uptake of the electric fencing concept. A subset of students investigated the opinions of the villagers regarding water and performed basic water testing. The most pressing concern was the elevated presence of coliform bacteria.

REFRESCH's program assistant participated in a five-day professional development and research-networking workshop with the CAB-Alliance (Central African Biodiversity Alliance), Gabonese students and faculty, and various research entities active in Gabon. Held at the Masuku University of Science and Technology (USTM) in Franceville, the workshop provided a prime opportunity to assess the current landscape of research and development, identify opportunities for collaboration, and introduce the REFRESCH project’s objectives to interested parties.

Vice Dean Patrick Mickala of USTM visited UM in Ann Arbor, meeting many faculty and establishing himself and USTM as strong collaborators with REFRESCH on efforts going forward in Gabon.

This trip led to the creation and cultivation of numerous new relationships with a wide range of stakeholders - teachers at vocational schools, anthropologists at University Omar Bongo, politicians in Lambaréné and regional level government, administrators at the Albert Schweitzer Hospital, conservators with WCS, administration at CENAREST, and the director of local efforts at The Nature Conservancy (TNC). All this was in preparation for a large, multi-stakeholder workshop to be held in May 2016 at the Albert Schweitzer Hospital.

In May, twenty five faculty and students from UM, together with academic colleagues from Gabon, co-conducted a collaborative workshop on the grounds of the Albert Schweitzer Hospital in the town of Lambaréné. The workshop was designed to bring together a wide variety of stakeholders from Gabon - universities, vocational schools, ANPN, NGOs, government, and 17 villagers - to discuss and codesign innovative technologies and approaches with the potential to address concerns in rural communities. Two unique and highly successful facets of the workshop were technology demonstrations in a maker space and the piloting of an example of case-based curricula. The major research question was whether or not this unique workshop model could result in a positive outcome for all participants. For REFRESCH, an important goal was to secure commitments for meaningful collaborations on future research efforts. The overall result was extremely positive in that each stakeholder group expressed interest in continuing collaborative efforts with REFRESCH on many different fronts.

Four faculty and a graduate student from USTM and Prof. Jean-Jacques Taty from Howard University came to Ann Arbor to plan collaborations for 2017 and beyond. While in Ann Arbor, USTM also discussed additional potential collaborations with conservation-minded NGO's on water quality and electric fences. Enjoyably, learning experiences went beyond the conference table. Though the temperature hit 60 F on the day the team from USTM arrived in Michigan, they had experienced a snowball fight by the time they left.

In February 2017, UM graduate students and a postdoctoral fellow from Chemical Engineering and Civil and Environmental Engineering traveled with REFRESCH's program assistant to Gabon to further develop collaborations with USTM and nonprofit OELO and to explore additional potential aspects for research with several entities in Libreville.

Five REFRESCH faculty/staff visited Libreville and Franceville. Days in the capital were dedicated to meetings with government (Ambassador Michael Moussa Adamo; Secretary General Rossatanga-Rignault; Ministry of Labor, Employment, Technical and Professional Training, and the Insertion of Youth; ANPN), academia (UOB; Ruban Vert; School of Art and Manufacturing) and private industry (OLAM). The group spent a week in Franceville meeting with collaborators from engineering and biology departments at USTM, with whom they visited the Moanda Mining and Metallurgical School, various local government offices, and waste companies.

A small US/Gabonese team spend a month together in Gabon. They met with city and provincial officials and many community organizations to learn more about culture and cooperation in Gabon. Relationships with the Albert Schweitzer Hospital and local NGO OELO deepened as the team examined ways to further collaborative efforts. The team visited USTM (Franceville) and Ruban Vert (Libreville) to explore interest and responses to case-based teaching methods. Local interest and knowledge-base in solar PV technologies were explored as well.

Several REFRESCH faculty/staff visited Gabon to further investigate the potential for working together with the Gabonese government to establish a REFRESCH Institute for Sustainability Education on the grounds of the Albert Schweitzer Hospital. Extensive time was spent with personnel from the Ministry of Labor, Employment, Technical and Professional Training, and the Insertion of Youth. In Lambarene, the old Siemens solar streetlights were used as demonstration pieces to illustrate the eagerness and capability of local people to learn how to repair existing solar infrastructure.

A year after conversations with communities near Lambaréné revealed residents’ desire for cleaner water, four Art and Design undergraduates and two Gabonese colleagues returned with ceramic pot water filters. They demonstrated filter use with high school students at the Albert Schweitzer Hospital and people in the river village of Iguendja. ”WASH” practices – water, sanitation, and health behaviors vital to clean water – were discussed too. Professional quality laminated instructions for filter recipients were produced with input from the Raskin group, Civil and Environmental Engineering.

Two graduates of UOB and USTM followed-up on REFRESCH's recent energy- and water-related efforts. The young people talked with providers of solar photovoltaic systems, searching for companies with knowledgeable, welcoming employees and dependable products. Another part of this effort involved interviewing individuals who had used ceramic pot water filters (CPWF) for a number of months to determine their level of satisfaction with the product. Finally, the young people met with a ceramist at ENAM, the National School of Arts and Manufactures, who is interested in working with REFRESCH and the Institute for Rural Technologies on filter production. The favorable responses to the filters sparked the decision at UM to develop CPWF production capability in Ann Arbor.

As a result of the interest in ceramic pot water filters in Gabon, students at Stamps School of Art and Design are learning how to produce the filters at the UM, with the intention of transferring the technology to Gabon. This effort began in 2017 and is continuing into 2018. The Institute for Rural Technologies (Libreville) is the lead Gabonese partner.

Djessi Tchouty arrived at the UM for a 10 month stay, sponsored by Civil and Environmental Engineering. Working with Dr. Fonoll Almansa, Djessi is performing experiments on a novel anaerobic bio-reactor mimicking the cow stomach to enhance the conversion of food waste into valuable chemicals.

On Christmas Eve, the best gift in Ann Arbor, Michigan was the arrival of Franck Binze Bi Kumbe. Through May 2018, he will be supported academically by UM's School for Sustainability and the Environment. Franck is developing concepts for field research in Gabon on indigenous and colonial conceptions and practices surrounding clean drinking water in rural areas as they intersect with/overlap with or inform emerging conceptions and practices of urban drinking water treatment and use.

Analyzing demand for solar energy - Libreville, Lambaréné, and points between

A team of four students from UM’s Ross School of Business, supported by REFRESCH and the William Davidson Institute, traveled to Gabon to continue REFRESH’s assessment of demand for solar energy in rural off-grid areas. The team, guided by input from experts in Michigan and Gabon, interviewed communities, private industry, NGO’s, and academic enterprises as part of REFRESCH’s goal to better understand business models and the needs for capacity building, entrepreneurship, community education, and job creation in the solar energy sector.